I can’t tell you how glad I am that we added Ireland! Though more expensive than most of the offerings in continental Europe, they are still less expensive than private universities in the United States.
Jennifer Viemont on Oct 21, 2022 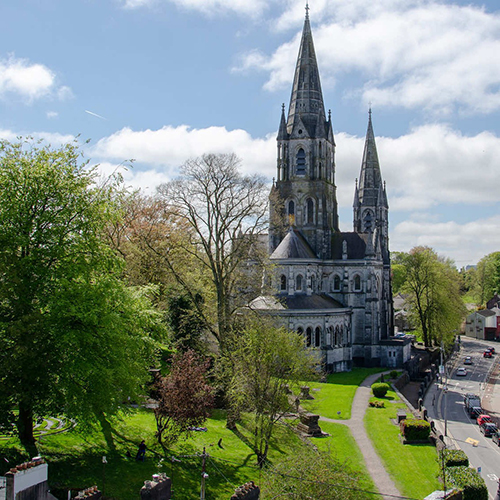 My weekends as a preteen in the mid-80s often involved trips to Blockbuster with friends. If we weren’t renting The Mask (with Cher) for the millionth time, then a National Lampoon movie was a likely pick. Say what you will, but European Vacation remains one of my favorites of the series. I can’t even count how many times Sam, Ellie, and I have said “Look kids, Big Ben” as Tom struggled with traffic circle exits in various countries.

Anyhow, you might recall the bicyclist from the movie. Chevy Chase continually causes all sort of accidents that injure this character, but each time the cyclist responds with kindness, friendliness, and unnecessary apologies. Though this part of the movie took place in London, I thought of it often while we were in Ireland.

The Trip to Cork

As an introvert, I am not someone who enjoys small talk with strangers. By this, I mean strangers who will stay strangers-like the person sitting next to me on the plane. Small talk exhausts me, so expending that energy with someone I will likely not see again doesn’t appeal to me. Every single person I met in Ireland was just so genuinely friendly, that conversations didn’t feel like small talk with a stranger. It was really remarkable. I was talking to an administrator from University College Dublin, who is also American and a self-proclaimed introvert like me, and he noted that it’s really hard to truly explain or understand until you experience it. We lived in North Carolina for many years, so friendliness from strangers is something I’m familiar with, but this is something beyond that.

We started our trip in Cork, which was a three-hour train ride from Dublin. I was particularly excited about this part of the trip, as Cork is known as a great food destination. And it did not disappoint! The cheeses were particularly amazing, though the emphasis on local food was prevalent in many places around the city. I walked past more than one kebab shop that advertised using only local Irish lamb. I also like that it’s a smaller city, which made getting around and exploring quite easy. Though not evident in the summer, it’s a university city, with about 17% students included in their population of 210,000.

This trip was different than others I’ve been on. Though Irish universities plan to open in the fall, most are still closed with employees working from home. In most cases, I walked around campuses to get a feel and then had zoom calls with administrators who answered my questions. The exception was University College Cork, as much of the staff in the International Office continued on campus work through the summer. Due to this, I was able to have an in-person meeting.

Surprisingly, there was only one rainy day on our entire trip. Of course, this happened to be the day of my meeting at UCC so after seeing the forecast I decided to check out the campus a day early. As you may know, centralized campuses are rare in Europe. Usually the different department buildings are scattered around the city. Though there are some beautiful university buildings, they aren’t generally all in one place. The UCC campus dates back to 1845 with incredible landscaping and Gothic architecture. Even some of the newer buildings are built into original structures, which provides a striking contrast. I have to say, this must be the most beautiful campus in Europe that I have visited.

UCC has 76 bachelor’s and more than 100 masters. This is comparable to the number offered at the other Irish universities. So how does a student choose between schools in Ireland if they are looking for a program that is offered at many of the traditional universities (as opposed to the technological instituted, which is a topic we will explore in a future post)?

A student might like UCC because of the beautiful facilities, the commitment to a green campus, the focus on sustainability and green campus, the career services offerings, the breadth of student associations, or the incredible English Market (ok that one is me…). While there are a number of aspects students could look at, one that I think is important is international student experience.

There are factors around the international student experience, though, that are directly affected by the international student resources in place. This was just one area in which UCC impressed me tremendously. These supports start with the admissions process. International students apply directly to the international student office who work with the applicant to answer questions and assist with the process. Application decisions are turned around quickly, generally within 4 weeks or so. These supports continue after acceptance and before starting at campus. What struck me were the ways in which the international office team goes above and beyond the help their students during this time. Before they even arrive on campus! One example of this is the email that was sent to students this summer. It was friendly and informative without being overwhelming. They provided information about arrival, orientation, events and more as well a number of ways for students to connect through Facebook groups and such before arrival. Sam was a first year student at two different Dutch universities and the difference in this before arrival support and what he received is dramatic.

The support from this office continues after arrival and through graduation. In addition to the orientation that is integrated with the non-international students, the international office hosts four “Essential Information” sessions for international students. These include sessions on immigration matters, how to access various supports and resources at UCC, practical tips, and issues around culture and transition. Like the summer email, I like that the information is partialized and presented in a way as to not overwhelm the students. The staff really seemed to care about the students and their overall well-being. During covid times, they sent out regular emails, with ways to connect that was aligned with restrictions on movement and provided the students with an online hub to access supports around wellbeing.

Happy we Added Ireland to the Database

I can’t tell you how glad I am that we added Ireland! Though more expensive than most of the offerings in continental Europe, they are still less expensive than private universities in the United States. All the traditional universities have FAFSA numbers and accept direct federal student loans (not the Pell Grant) and some have scholarship options for international students. Of course, many of are pursuing higher education in Europe in order to avoid debt for ourselves or our children…That said, many of our members are exploring options in Europe due to other benefits around international education and/or have been saving according to US tuition rates. If your budget includes options in the12-20k per year range, I highly suggest exploring the options in Ireland.