Why Prague is a Great Option for US College Students

Before visiting Prague universities for Beyond the States, our international travel destinations were determined by an interesting food scene or visiting family overseas. Those criteria prevented me from getting to Prague in the Czech Republic earlier, a fact I truly regret.
Jennifer Viemont on Oct 21, 2022 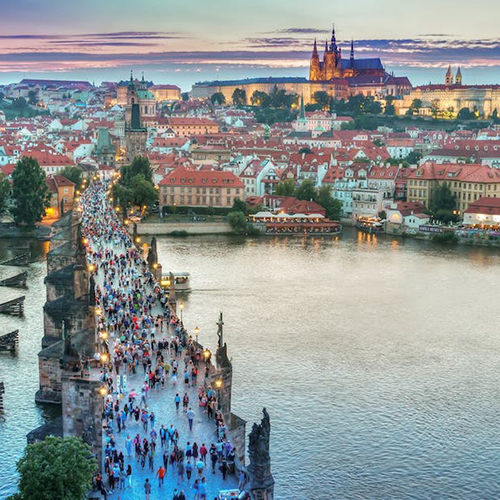 Before visiting Prague universities for Beyond the States, our international travel destinations were determined by an interesting food scene or visiting family overseas. Those criteria prevented me from getting to Prague in the Czech Republic earlier, a fact I truly regret. Prague is seriously one of the most beautiful cities in Europe to study abroad – even in the dead of winter. One thing that I liked about it is that you could see and appreciate the architecture throughout the city without going into the touristy areas.

Prague Castle is worth checking out, but what I really enjoyed was the Museum of Miniatures that I learned about in the Atlas Obscura. This is actually a small room that has micro miniatures which you view through microscopes. I’m already a sucker for miniatures so I was all about this! Micro-miniaturist Anatolij Konenko created the collection which includes a caravan inside the eye of a needle, a flea with tiny horseshoes and a replica of Swan Lake on a poppy seed-a poppy seed!! There is also a sailboat on a mosquito wing, golden horseshoes on a flea, and the Lord’s Prayer written on a hair. If only they had a small gift shop…

Prague felt very livable to me. One factor I look at when assessing livability is the accessibility of modern day conveniences. I’ve stayed in some cities where I have walked endlessly just to find a place to buy bandaids. Supermarkets, convenience stores, and drug stores were easily found in all the neighborhoods I visited in Prague. Other services, like places to exercise or nail salons, were also easy to get to. The city is fairly compact and walkable, but also with good public transportation. I felt safe everywhere I visited throughout the city and learned that the Czech Republic is actually the 6th safest country in the world just ahead of Switzerland and far ahead of the US which ranks 103rd out of 162.

As I noted in our last blog, I do wish I had paid more attention to current events in high school, particularly those that related to the Cold War (1947-1991). The owners of my Airbnb were a hip young couple in their 30s. Matej picked me up from the airport and during the drive back told me about his own memories of the time. His dad was in a band and had to flee the country in the 80s, as he was going to be imprisoned for playing Led Zeppelin songs. Matej remembers waiting in long lines for simple things like toilet paper to be rationed. He also recalled the excitement through the country after the largely peaceful Velvet Revolution, the period of upheaval and transition, that took place from November 17 to December 29, 1989.

One of the Prague universities I want to tell you about is Anglo-American University. As in Poland, private schools only came into existence after the end of the Cold War. Though AAU is a fairly young school, in terms of Prague universities, founded in 1990, it is the oldest private institution of higher education in the Czech Republic. There are a number of schools throughout Europe that are accredited by US agencies and they use that as a way to charge American-sized tuition. One of the many benefits of college in Europe is the affordability, so I tend not to give those schools much attention. Anglo-American University interested me as all of their programs are English conducted, they tout an American style of teaching, and they have WASC accreditation, an agency that also accredits schools like Stanford University. Despite all of that, their tuition is incredibly reasonable at under 4,500 euros per year – making AAU a Prague university value!

The facilities at AAU are incredible. They recently moved to a location in a great part of the city near the Prague Castle. It’s a historic building that they renovated for school use. I can’t even begin to tell you how beautiful it is, so it’s worth checking out here. Be sure to look at the computer lab!

AAU has seven bachelor’s degree programs (all of their programs are conducted in English). Like most schools in Europe, students apply to an actual program but since there are a lot of electives students can generally do an internal transfer to switch programs after the first year. AAU prides itself on small class size (max of 25 students), interactive group work and class discussions. The small student body does not mean that students have a limited choice of classes. Over 200 courses are generally offered each semester. Some of the classes sound really cool as well. Isn’t it a great time in our world to take a Psychology of Aggression course? There is also a class about NATO in which different NATO representatives give virtual lectures throughout the semester.

The small student body allows students and professors to get to know each other and professors are accessible to students inside and outside of class. The small school size presents less potential social issues than in the US. While there are a number of ways to get involved socially at AAU, staying in a student residence opens up your opportunity to experience student life in Prague as a whole.

The Liberal Arts program at Charles University is fairly new. It started in 2012 and has about 45 students per class. Though it is called Liberal Arts, after learning about it, I think it’s more similar to the integrated programs like the Philosophy, Politics, Economics (PPE) or Philosophy, Politics, Law & Economics (PPLE) programs offered at many schools. Of course, integrated programs are also a great option for students who aren’t sure what they want to study or can’t decide on just a single area of study. During the first year, students take introductory courses in European History, Anthropology, Economics, Psychology, and Sociology. They also have four different small seminars and choices for electives. Electives account for more than a third of the required credits, so it is here that students can focus on their areas of interest within the disciplines.

Comprehensive exams account for 40 of the 180 total credits. These are not formal classes, but independent work that is done through the semester (during the 2nd and 3rd year) preparing for the exam. Students are required to take comprehensive exams in four different subjects. For each of these, they choose a set number of books to read off of a list (usually they choose 12). They then give a presentation and have an oral exam about the reading they did. Needless to say, this requires that the student is independent with good time management and study skills. The programs end with a bachelor’s thesis, another opportunity for the student to focus on their specific area of interest.

This department is about 20 minutes on the metro from the city center, in a less picturesque area of Prague. Large universities sometimes concern me as getting through bureaucratic levels in one’s own language can be a headache enough without throwing language barriers in the mix. However, students take the majority of their classes within the department and the International Students Office and Student Administration Office within the department can meet most of the students’ needs.

If you’re interested in studying in the Czech Republic in English, there are 45 English conducted bachelor’s programs in the country, 32 of which are at Prague universities. The average tuition in the Czech Republic is just €4,260. Prague universities provide great options for students who want to take advantage of the affordable tuition of Eastern Europe while living in a livable and beautiful city. I have to tell you, I’m actually glad that I’m not a big fan of the heavy meat-based Czech foods otherwise I would have had trouble leaving!