I’ve learned about some amazing programs for international students to study in Hungary, discovered langos, and finally understood the appeal of Budapest!
Jennifer Viemont on Oct 21, 2022 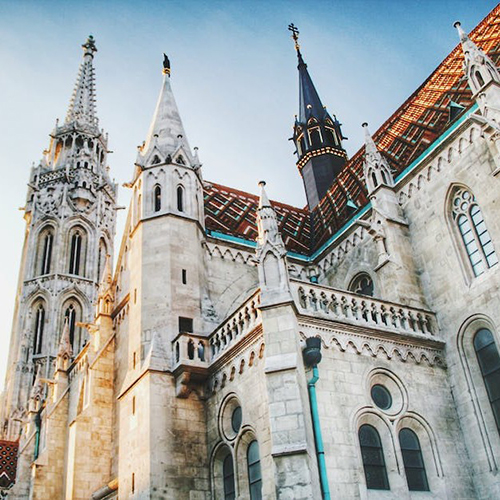 I arrived in Budapest to write about the options to study in Hungary for my third week of travel. I had a long train ride without WiFi from Prague, my taxi driver overcharged me, and I had trouble checking into my Airbnb – which was a bit of a dump. These factors, along with the fact that I hadn’t seen the sun for almost a week and that I was tired of Eastern European food, had made me quite grouchy for my first few days. By the end of the week, though, the sun was out, I’d learned about some amazing programs for international students to study in Hungary, discovered langos, and finally understood the appeal of Budapest!

Budapest is split in two by the Danube River. Buda is on one side and Pest is on the other.  Most schools are on the Pest side where it is more residential with an abundance of cafes, bars, and such. In some parts of Pest, I had trouble determining whether an area was trendy or sketchy. Turns out, most were trendy. There are these popular things called ruin bars that are set up in abandoned buildings. I planned to grab a pre-dinner drink in one near my apartment at the Red Ruin bar but walked in and right out, when I realized I was much too old for this crowd.

The Buda side of the River is absolutely beautiful. Of course, the benefit to staying on the Pest side is that you get to see that view every day. I walked across the bridge to explore the Buda Castle, Fisherman’s Bastion and St. Matthias church. It was an incredible experience, though crowded with tourists. I’m glad I stayed on the Pest side.

Cost of living is incredibly affordable here for students wanting to study in Hungary. A train ticket without a student discount is right around $1. Most of my meals cost under $5, rooms in student residences generally cost under €200 per month, and you can live large in a large nice shared apartment for under 400€ a month. The city and public transportation are easy to navigate – after just a few days I rarely had to glance at Google Maps.

The American students I spoke with in Budapest are incredibly happy with their decision to study in Hungary and their experience. Interestingly, this is the first time in Europe for both of them and the affordability was one of the decision making factors they used. Matthew is a nontraditional student (age 39) from Washington state who decided to study in Budapest with his wife and two small children to pursue a master’s degree. Chris is a from a small town in Louisiana and attended LSU for two years before making the move to study in Budapest. Even with airfare factored in, he is paying less to study in Hungary than he was as an in-state student at LSU (Who knew LSU was $32k per year all in??). The impetus for both Matthew and Chris was a strong desire to see the world and experience diversity. They both appreciate the various international backgrounds of their friends and the students in their classes as well as the opportunity this diversity provides to learn different perspectives on world events and even day to day living. Chris also said that he appreciates the much smaller class sizes. He noted that at LSU he had many classes with 800 students and no personal contact with the professor. While during his study in Hungary, most of his classes here have less than 20 students and professors are available in and out of all the time.

Matthew and Chris attend Budapest Metropolitan University, a private university of applied science that was founded in 2001. The school emphasizes hands-on, practical learning that leads to employment. In fact, 86% of their graduates have employment within 5 months or graduation and 33% of those are hired where they completed their internships – a major benefit of studying in Hungary. The school has relationships with 400 Hungarian companies and 300 international companies for internships and job placements. The Career Center holds programs throughout the year to prepare students for employment. For instance, at the beginning of each semester students take a Career Management class. This practical training is run by various companies and helps students learn skills around project proposal, professional communication, and overall presentation.

Budapest is an interesting place to be for students in Metropolitan’s media related programs. Many American films shoot here. Students have done internships with the production companies working on films like Angels and Demons, Inferno, and a yet to be released Jennifer Lawrence movie.

The facilities at Budapest Metropolitan University are fairly typical for a university of applied science. Though they aren’t held in architecturally impressive places like many of the older public universities, the buildings are well maintained and have modern equipment. The school has 12 English conducted bachelor’s program that is 3-4 years in duration and range from 4,200-6,000 Euros per year.

The school I am most excited to tell you about is not in Budapest, but in Pecs (pronounced “paytch”). When I planned my visit to review options to study in Hungary, I knew I had to visit this school. Pecs is a student town, with almost 15% of the 150,000 residents attending the University of Pecs. Students and administrators note that the smaller size of the city helps students feel less overwhelmed than they would in a larger city. University buildings are not far from the city center, which holds cafes, pubs, cinemas (that show English movies with Hungarian subtitles) and other popular student destinations. There is a brewery in town which was founded in 1848 and produces eight kinds of beer. Students can also take advantage of nearby hiking or trips to nearby Croatia.

Though Pecs is a good three-hour train ride from Budapest, it has culture on its own. In 2010 it was named a European Cultural Capital for the year and it also holds a UNESCO World Heritage Site. I had grown accustomed to seeing the Soviet influence on architecture in this part of Europe, but Pecs holds architectural influence from the Ottoman occupation in the middle ages, mostly in the form of churches which were turned into mosques and then back into churches.

The University of Pecs is the oldest university in Hungary, celebrating 650 years, and is globally ranked. I was impressed by the number and variety of programs they offered in English for such reasonable tuition. I was even more impressed after my visit. Pecs is a large university, with 20,000 students, but each department is self-contained with its own International Student’s Office, Student Union and more. The buildings are spread out throughout town, but students who stay in the dorms are generally placed in the dorm close to their department. There are easy public transportation options for students who choose to rent an apartment in town.

The university facilities are impressive and diverse. Though some are in old historic buildings and others are in modern buildings built for the university, all are well maintained with up to date classrooms and labs. The school offers 18 English conducted bachelor’s programs and 3 integrated bachelors/masters programs in medicine, pharmacy, and dentistry. The bachelor’s programs include various offerings in the fields of health sciences, business, social sciences, humanities, computer science, engineering, math, and science. Most of these programs are three years in duration and range from 3,200-6,900 Euros per year.

Was I this impressed with all the schools I visited? Nope. As a matter of a fact, I visited a globally ranked school that I would not advise Americans apply to due to their attitude towards international bachelor’s students. Beyond the States members have access to our database of all the accredited English conducted bachelor’s degree programs in non-anglophone Europe. Many listings have a “Notes” section that contains all the information – positive and negative – that I learned when visiting schools.