College in Europe: The Escape Plan From The Madness of the US

Why don’t more people opt out of this costly, stressful, and arbitrary system? I think it’s because many don’t know that there actually is a better way!
Jennifer Viemont on Oct 21, 2022 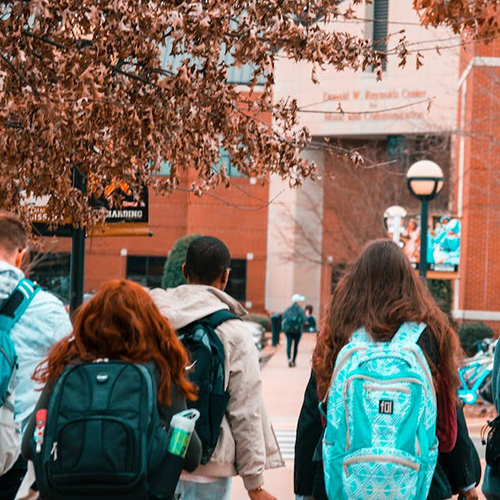 I just read that there are over now almost 40 schools in the US that charge more than $65,000 per year. SIXTY-FIVE THOUSAND DOLLARS PER YEAR! That is absolutely mind blowing to me. What is just as shocking to me is the cut throat admission process which is actively hurting our kids. A recent Psychology Today article notes that it is this aspect of the high school experience that is creating a mental health crisis on campus.

I’ve talked recently about what I’ve learned about the crazy US admissions process. I’m not even living this and thinking about it stresses me out! Why don’t more people opt out of this costly, stressful, and arbitrary system? I think it’s because many don’t know that there actually is a better way! Let me tell you about how things can be different. When we founded Beyond the States, our son Sam, knew that he was interested in studying in Europe. Going into his freshman year, he knew some countries required US students to have either an IB diploma or up to (but no more than) four AP scores of 3+. He decided to take the four AP courses throughout sophomore, junior, and senior year in order to keep all his options in Europe open. Though I have issues with APs, spreading the four courses out over three years seems very doable.

Sam knows that he is interested in studying the Middle East, specifically the various conflicts in the region. One school in the Netherlands has two programs he is interested in; an International Studies program and a Security Studies program. The International Studies program allows him to choose a regional focus area from their offering of seven, one of which is the Middle East. This focus is chosen after the first semester of study. Students study the history, economy, culture, and language of their chosen region, along with general courses on international economics, politics, and globalization. During the third year, students can do an internship or do a semester abroad in their region of study. The final semester is spent in a practice course, which teaches them to apply the knowledge from the program through case studies with international organizations. A thesis is also completed in the final semester.

Students in the Security Studies program “learn to analyse contemporary security and safety issues and devise strategic solutions”. The first year introduces students to the threats and the vulnerabilities through looking at Syria and Iraq as well as the threat of natural disasters that affect infrastructure like Japan’s Fukushima nuclear plant. The second year, students learn more about strategies for protection by studying the challenges of terrorism and counterterrorism, cyber threats and risk management, as well as war and peace building. The third year student can specialize through a minor, study abroad, or do an internship. The third year ends with an integrated project and thesis.

Sounds pretty cool, doesn’t it? Both of these programs are at Leiden University, in the Netherlands, which is ranked in the top 100 schools globally. As you may know, I’m not that interested in rankings. I only mention it because once I tell you about what the admission process looks like, you might make the incorrect assumption that it’s not a good school.

At many English College in Europe, including Leiden, the focus is on the fit between the student and program as opposed to the “holistic” process in the States. Neither of these programs has an enrollment cap, which means that if an applicant applies by the deadline and meets the admission requirements, then he is admitted. The Netherlands is one of those countries that have an AP requirement for their research universities. Sam should be able to meet that requirement. He will need two reference letters, one of which is academic. These are not shielded in secrecy like they are here. He uploads them to the school himself. That way if, by chance, one of the recommendations is not as strong as he would like he can either talk to that teacher or ask someone else to write one for him. He will also need to write motivation letters-a separate one for each other programs he applies to more info about water damage restoration in riverside ca. These do not have to reveal any emotional revelations or talk about any trials and tribulations he encountered through his life. He will just need to write about his interests and future goals as they pertain to the program and speak to why he is interested in the particular program, specific school, and specific city and country. Given that he has spent his high school years exploring his interests (the Middle East is one of them along with -full disclosure- playing video games), this should not be particularly challenging.

So, not only does Sam not have to pad his resume with all sorts of activities and accomplishments in areas that don’t interest him, he also doesn’t have to take ACT or SAT prep course as the scores are not used in the admission decision. Further, Leiden uses rolling admissions which begin in October each year, so Sam will be able to apply in October and receive a decision 6 weeks later – well before Christmas! Just like the acceptance offers in the US, this will be a provisional offer which requires him to graduate high school and obtain a 3+ on his final AP.  Ready for the kicker? Each of these programs only takes 3 years to complete and cost just around $12,000 a year -and that’s on the high end of tuition in Europe! What a breath of fresh this all is!

Would you like to learn more about how and why we made our plan to send Sam to Europe for college? Would you like to see the thousands of affordable, English conducted options? If so, then check out our membership options. Members of Beyond the States gain access to our database of over 1,700 English-taught bachelor’s programs. Graduate members have access to over 8000 English-taught master’s programs.