Many of you may know that I now have kids in both the US and European higher education systems. My daughter Ellie is attending an in-state university in North Carolina (NCSU). My son is studying at a university in Prague, Czech Republic (AAU).
Jennifer Viemont on Nov 18, 2022 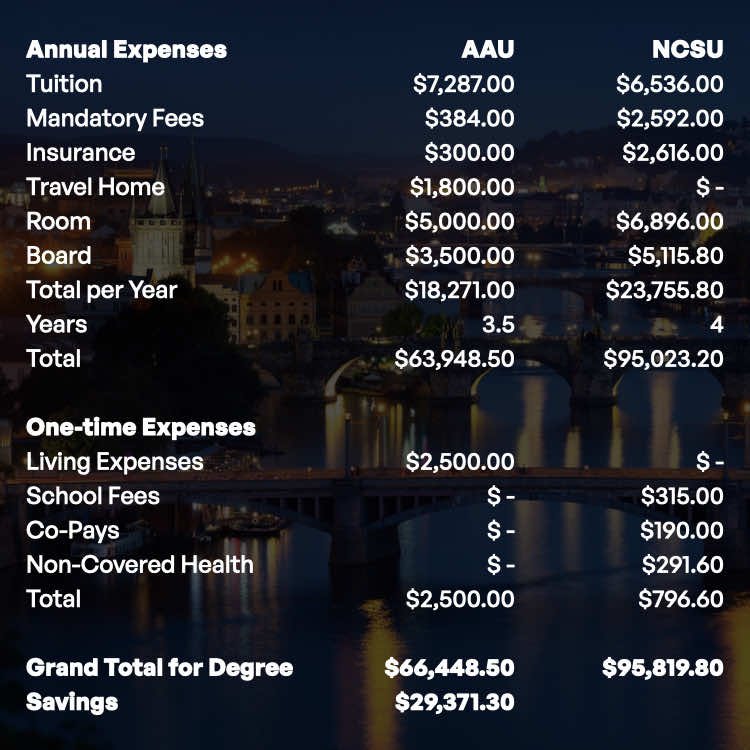 Jennifer Viemont
Founder & Chief College Advisor
Find Your Dream College in Europe
Our database offers students a unique opportunity to find a degree from a top-ranking European university while still being able to study in English. We make it easy to find and apply to these programs, and provide all of the support you need along the way.
Get AccessBook FREE Strategy Call
Share this article

I’ve been able to experience the range of higher ed costs in a less abstract way. What I’ve discovered has been eye-opening, the degree of hidden costs in the US and, unsurprisingly, the hidden savings in Europe.

People often have the misconception that somehow, be it due to traveling home or living abroad, that living in and gaining a degree in Europe can’t possibly be less expensive when compared to the US. While it’s broadly understood that tuition in the US is inordinately expensive, it’s not widely known that the nature and tally of other costs of getting a degree in the US just aren’t the norm elsewhere in the world.

My daughter, Ellie’s, in-state tuition at North Carolina State University is $6,536 per year, which is just less than my son, Sam’s, tuition at his school in Prague at $7,287. But unlike Ellie, who will be in school for the typical 4 years (crossing fingers!) Sam's program at AAU in Prague is only 3 years in duration, which is commonplace in Europe, offering us further savings.

But here’s where the savings in Europe really start to kick in: when we look at mandatory fees. Sam pays a single $192 administration fee each semester (which is actually not a fee you normally find in Europe). My daughter’s mandatory fees are $1,296 a semester, as well as a one-time first-year fee of $315, just for being a freshman. These fees reflect future renovations to the school and expansion to the fitness center and student center. But for Ellie there is also a campus transit operations fee, an education and technology fee, an intercollegiate athletics fee, and a fee of $222 per semester for student health.

Which brings me to my next area of MAJOR savings, and that is in the area of health care. In addition to the $444 per year for the student health center at NCSU, Ellie is required to have health insurance, which is not unusual. We chose to keep her on our family plan which is comparable in price to the $2,616 annual fee for the NCSU plan. Though we are required to pay the student health fee which covers copays at the center, we have come to frustratingly learn that they have such a backlog that students are unable to get an appointment when they are sick!  For us, this has meant two $20 copays to see her doctor here at home, one $50 copay to urgent care and two $50 copays to urgent care orthopedics after she sprained her ankle. Not to mention the $291.60 we had to pay for the portion not covered by our insurance!

Let’s compare this to my son’s health related fees. He did not stay on our family insurance plan, since it wouldn’t be relevant for him in Europe. As a visa requirement, he did have to get mandatory student health insurance, which costs about $300 a year. We hadn’t really wrapped our brains around what this would cover so, after he broke his wrist and required surgery in the Netherlands, we followed up with the hospital each day about the bill. They kept putting us off and actually seemed a little annoyed by our continued follow up. When we got the bill, we understood why. Shockingly, it was ZERO euros out of pocket!

Let’s keep going and compare room and board. First year students at NCSU are required to live on campus.

Ellie has a tiny room that she shares with another student and a large bathroom to serve all the females on her floor of the dorm. We pay $6,896 (which, for the 8 month school year, is $862 her month).

Sam has a private room in an apartment he shares with three other  students, which has two bathrooms, a kitchen, and a living room. We pay $500 a month for rent and utilities. Yes, this is in Prague, which is a relatively affordable place to live, but we still paid less than Ellie’s fees for private rooms in his equivalent Dutch student residences (where he lived his first two years). Ellie has a mandatory meal plan at NCSU which is $5,115.80 (which, for the 8 month school year is $511.58 a month). Of course, this only includes on-campus food options. In contrast, we give Sam $350 a month for food, transportation, and all of his other living expenses.

Sam flies home twice a year and we can purchase his tickets early to find good fares. Though we generally use miles, the tickets cost around $900 per trip. While Ellie doesn’t have travel expenses home, there are a number of other expenses that, while optional add to the overall costs. We pay for parking and car insurance which make it easier for her to get home (and to the off campus doctor’s appointments…). She has sorority fees, and we’ve just learned that her rent next year, off campus,  will be increasing by $200 per month compared to this year! Of course, Sam has optional expenses too that are almost all related to traveling around Europe, but I’m not factoring these fees into our cost comparison here, since they are optional vs mandatory fees.

Okay, let’s do the math. So Sam’s total expenses are at $18,271 for a year at his university in Prague. Because he transferred to this school from another school in Europe, his degree is taking a total of 3.5 instead of the typical 3 years. Let’s even add an additional $2,500 on to account for the higher cost of living when he was attending college in the Netherlands prior to transferring. Sam’s sum total is right around $66,154 for tuition, room, board, fees, travel home-EVERYTHING for his entire undergraduate degree. Astounding, but this amount is just a little bit more than ONE YEAR of just tuition and fees for a single year at a private university in the US.

Costs at NCSU in North Carolina

Costs at AAU in Prague

So, in our family’s case, we are saving at least  $29k with Sam’s degree compared to Ellie’s, and that’s just compared to our in-state tuition example.

If Ellie would have chosen to get a degree out-of-state, the numbers would be much more dramatic. But, full disclosure-Ellie was accepted into a school in Ireland this past year where the tuition was comparatively higher, at about $13,500 per year. (Schools in Ireland tend to have similar price tags to US schools). If we were comparing her cost of going to school at the university in Ireland versus at NCSU, our savings would not have been quite as dramatic and probably closer to $15K.

Those who know me know I’m often guilty of dismissing things that sound too good to be true. But one thing I’ve come to learn is that it’s important to recognize that our frame of reference around things that are and are not normal contribute to our skepticism. In this case, parents and students taking on massive amounts of debt to pay for higher education is not the norm in most first world countries. Food for thought: maybe it’s not that the cost of higher education in Europe is incredibly affordable, but that the higher ed costs in the US are the real problem.