What I Learned About College in the Baltic Countries

A trip that helped me realize that there are some important questions students should look into when exploring a particular school or program in Baltic countries.
Jennifer Viemont on Oct 21, 2022 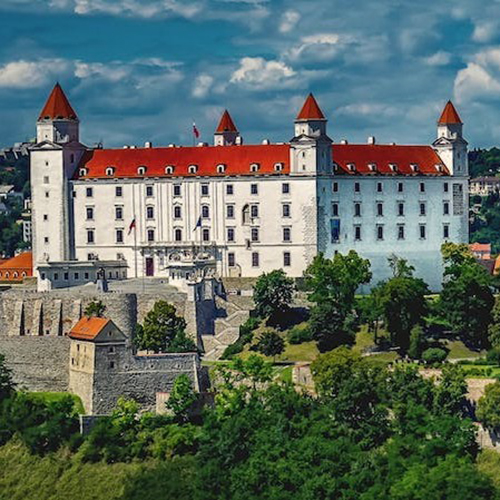 I arrived in Vilnius, Lithuania to investigate college in the Baltic countries, after spending 10 days in Jordan with my son, Sam. I loved Jordan, which provided so many different sensory experiences. There were the sounds of the calls to prayer five times a day which I found soothing (except the one that happen before 5 am…). There were the smells of spices and grilled meat. There were amazing sights I could not have even imagined in Wadi Rum (the desert) and Petra (you may recognize it from Indiana Jones and the Last Crusade). There was the Frogger-like experience of crossing the street each time (even at crosswalks) and then there were the ups and downs of traveling with a teenager, which included good bonding conversations, as well as seemingly constant “advice” (not criticism I was told…).

Though the experience was absolutely incredible, I didn’t realize how much energy it took until I got to Vilnius. I was a bit grumpy when I arrived. I flew Ryan Air-which I always say I will never do again but then get sucked in by the low price. The boarding process reminds me of the old days with Southwest Airlines-sort of a mob mentality and then the flight attendants spend the entire flight peddling their goods. The person who came up with the idea to allow passengers to sample perfume in an enclosed space is not on my good list…We got to Vilnius late, and the cold fresh air when I walked out of the airport helped improve my mood almost immediately.

I had the weekend to explore the town before my meetings with a college in the Baltic countries began on Monday. I like visiting places in winter, as if you like a place as it’s worst weather wise, then you can imagine how great it would be at other times of the year. There are some places that felt depressing to me in the winter, like Sofia, Bulgaria and Warsaw, Poland. Though the skies are just as grey in Vilnius winters, I didn’t have that same feeling. “Hygge” is a Danish word, that has been entirely worn out internationally now, but really applies to Vilnius. The simplest way of describing it is a really cozy feeling. There are a ton of coffee shops with comfortable seating and lit in a certain way that make you want to go in with a book. There are wine bars-again with the warm lighting-with signs for mulled wine. The streets are clean, the architecture is beautiful, the people are friendly. I felt like I wanted to listen to classical music as I walked around the city (which is not something on any of my playlists). It just felt nice, and calm, and cozy.

Now, what I appreciate as a woman in my forties is very different than I would have liked as a college-aged student! This made me especially curious about student life in the city. I noticed that I didn’t see a lot of college-aged students out and about. Of course, it’s quite possible that the hours that I am out are not the hours in which college students are out (or awake). Certainly there are cafes, bars, nightclubs, theaters and more. It did get me thinking about the international student experience though.

Academically, Vilnius University has some strong programs and may be a good fit for some students. A student who is a little older may have the independence required to get their academic and social needs met. A student with a Lithuanian background may know enough of the language and culture to socially integrate with local students. These are just important considerations when looking at a school.

After recharging in Vilnius, I enjoyed the energy in Riga! It’s more urban, with people of all ages out and about at all times of day. It’s also remarkable beautiful with striking Art Nouveau architecture and abundant green space. Though the population is under 650,000 (similar to Portland, Oregon) it is the largest city in the Baltic region and, thus, provides an active night life. It’s an incredibly affordable city, even more so for students. For instance, students pay just 16 euros a month for an unlimited public transportation pass (the regular price is 50 euros). I really fell in love with Riga and it’s now on my list of favorite cities in Europe.

Unlike most universities in Europe, the university has a true campus, just a 25 minute walk (or 15 minutes by bus) from the city center. The campus houses the different academic departments, dorms (which cost 65-180 euros per month), and an Olympic size pool (there is a large recreation center off campus). There is a large shopping center directly next to the campus which includes a grocery store. The buildings were very well maintained, inside and out, which is not always the case with public universities.

Each program is split into groups of no more than 50 students for lectures with much smaller groups for labs and computer classes. Students are always taught by professors (not assistants) who are accessible for help outside of the classroom as well. All of the four year programs are very hands on, with lots of labs and internships in order to prepare students for the workforce. They evidently do a good job at this, given their strong reputation with employers. When I visit schools I look for strong academic programs and educational outcomes and an environment that supports international student life-academic and otherwise. Riga Tech checked all of these boxes.

Though I absolutely love the Baltic area, I don’t think that Lithuania and Latvia are as far along with internationalization as Estonia is. That shouldn’t rule out the two countries for students. I would absolutely recommend Riga Tech, and there are certain types of students who the other schools may be a good fit for. More than anything, this trip helped me realize that there are some important questions students should look into when exploring a particular school or program. These are:

After gathering that information, you can consider the impact each area would have on your own personal experience.