Though McDaniel College Hungary has a very reasonable tuition, it wasn’t on my high priority list a few years ago. But then I visited and things changed.
Jennifer Viemont on Oct 21, 2022 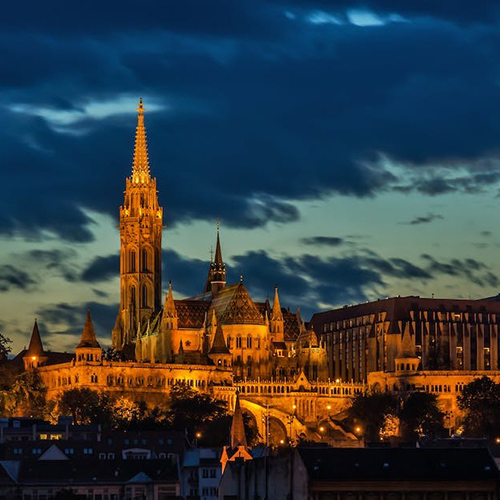 I didn’t visit McDaniel College in Hungary the first time I was in Budapest. There are a handful of American universities in Europe that I have a number of concerns about. Some of them focus on and cater more to American exchange students, which certainly affects the experience for full degree students. Others charge “American sized” tuition, which I don’t think is justified. Though McDaniel College Hungary has a very reasonable tuition, it wasn’t on my high priority list a few years ago.

After visiting Anglo-American University in Prague, one of my favorites and a Beyond the States member favorite as well, I realized that I needed to check into McDaniel College Hungary. I added a day to my recent trip and took a short two and a half hour train ride from Vienna to Budapest. McDaniel College in based in Maryland and is listed as one of the Colleges that Change Lives. They note the personalized, interdisciplinary curriculum, experiential leaning opportunities, and student-faculty collaboration as stand out qualities.

The Budapest campus is now a full branch campus of McDaniel College Hungary and the qualities noted by Colleges that Change lives absolutely extend to this campus. Class size does not exceed 15 students, there are not straight lectures courses and students and professors have direct relationships. I was struck by the innovative and interdisciplinary classes they developed for this campus. For instance, there is a journalism class called From Garden to Table  (you should really check this one out-it’s fascinating), a relevant Migration on the Move course, and a new course called Psychology on the Big Screen.

Students can major in Business Administration, Political Science & International Studies, Communication, Psychology, or Art History & Studio Art. This does not need to be decided at enrollment. Students are encouraged to sample courses from different departments and can easily change majors. Like US universities, McDaniel College Hungary provides resources for non-academic needs as well. There is a staff member who helps with housing, a mental health counselor, and support available 24/7.

All of this sounded great, but I had one remaining concern-the school size. There are only 150 total students at the Budapest campus, and this includes 20-30 exchange students they have each semester. When a school is this small, my concerns include class selection, student resources, and student life. Many of these concerns were quickly alleviated. They have strong student resources in place. Though somewhat limited in number (just over 50 each semester), they have sufficient diverse and interesting classes offered every semester. But what about student life? I went to a small high school and the entire student body at McDaniel College Hungary is just a bit larger than my small graduating class in high school!

McDaniel let the students speak to these concerns themselves and arranged for me to meet with a group of international students. One thing to note is that the student body represents 36 different countries. This diversity was represented with this group of students I met with. The group I met with included; Moburak, a Nigerian student who is the head of the Student Advisor Council; Dana and Stephanie who transferred from a community college in California; Rush, a student from DC who transferred from Trinity College in Connecticut; Claudia, a local student; Malisa, a student from Iran, and Dan who is a degree seeking student at the Maryland campus doing a semester in Budapest for a second year.

Dan’s perspective was particularly interesting since he could compare the experiences provided by both campuses. He takes a lot of literature courses and noted that theses courses in Budapest are stronger, with better and deeper class discussion. He loves the Budapest campus so much that he plans to transfer and begin studying full time next year. All of the students spoke very highly of the educational quality and course selection.

They also had wonderful things to say about the student life. In Europe, student life is not confined to campus and all the students spoke of the abundant social opportunities provided by Budapest. Most of the students said that their friend group consists mostly of McDaniel students, but Moburuk stated that that usually changes during the second year when the social group expands to students from other universities that you meet when you are out and at parties. The Student Advisory Council arranges a number of event throughout the year that include orientation events, pub crawls and movie nights. This year they have organized a trip to Montenegro (which has been on my short list for travel). Students pay just 200 euros for flights, food and accommodation!

Cost as a Consideration

That brings me to price. Budapest is an incredibly affordable city! The students I met with pay between $250-300 per month when they share an apartment, and some live alone for around $550 per month. Monthly transportation passes cost under $35 and you can get a langos, one of my favorite Hungarian dishes, for about $1.50. But here’s the incredible part-tuition. If you attend McDaniel in Maryland, you will pay $43,260 for tuition. In Budapest, you will pay just about $8,000 per year! Further, students who chose to spend a semester studying at the Maryland campus continue to pay the Budapest tuition price! Further, they accept FAFSA and the GI Bill.

I asked the students what they say to people who say, regarding European tuition, “You get what you pay for”. Stephanie hit the nail on the head when she responded “It’s not about this being inexpensive, but about American education being way too expensive”. So true!